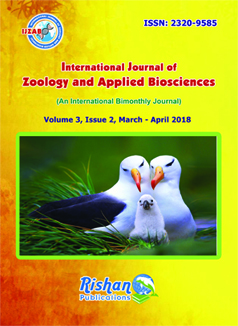 Like any other insects, bees also pass through four stages in their life cycle viz. egg, larvae, pupa and adult. It is their evolution of life from egg. The Queen is the mother of colony. The queen bee lays the egg at the bottom of each cell.  It daily lays about 1,000 to 1,560 eggs.  The egg lies across at the bottom of the cell for about 24 hours. In the second day the egg turns about 45, to its axis and on third day the formation of larvae begins (Fig. 1).

Fig. 1.  The four stages in their life cycle.

The nurse bee keeps watch on the development of larvae and feeds them with food according to their need. The infant food is produced by worker bees from their brood food gland. This food is a liquid known as Royal jelly. As they are fed with royal jelly, the larvae takes the shape of a semi circle and floats on their food, as the nurse bee continues to feed them not allowing the cell to dry. As the larvae continues to drink it also moves stirring the liquid appropriately. It is said, during larval period, the nurse bees visits the cell on an average 1300 times.

On third day of larval period, the menu is changed. The larvae are given first semi solid food called bee‑bread. The bee‑bread is a paste prepared out of pollen, honey and water. However bee‑bread is given to larvae of worker bee and drone but not to larvae of queen bee. Larvae of queen bee continue to take royal jelly. On fifth day of larval period, nurse bees gives mass feeding and seals the cell. After exhausting the food, the ventriculus gets connected with malphighion tube and rectum. Thereafter waste material out of the food goes out as excreta, while the nutrious portion gets absorbed to build the body. The larvae grow and cover the cell. At this stage it ejaculates silk fluid and forms cacoon around its body. The larvae grow very fast thereafter and change its cacoon in every 24 hours. After changing cacoon for five times, the larvae becomes pupa.

A beekeeper must keep watch on this development since he needs strong and efficiency worker bees to give him sufficient honey. Therefore he has to take care to get healthy queen bee to give healthier eggs with healthier future generation. At the same time he has to see that population of drone should be kept under control since drone does not give any yield but consumes honey to reduce total yield.